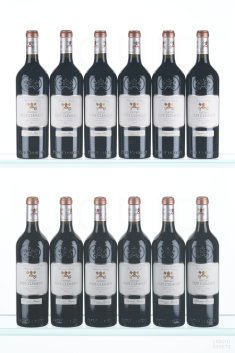 The 2015 Pape Clement is blended of 56% Cabernet Sauvignon, 40% Merlot and 4% Cabernet Franc, matured in 80% new and 20% one-year-old French oak barrels for 18 months. Medium to deep garnet-purple, it opens with profound notes of crushed red and black currants, black cherries and cassis with touches of mocha, baking spices, menthol and lavender plus a hint of new leather. Medium-bodied, firm and concentrated with tons of tightly wound black fruit and earth layers, it has a grainy frame and refreshing lift on the long finish.

One of the stars of the vintage, the 2015 Pape Clément is fabulous. Dark and beautifully resonant, it captures all the natural radiance of the year in the Pape Clément style. Super-ripe black cherry, plum, mocha, chocolate, new leather and spice effortlessly fill out the wine's ample frame. Soft contours and an open-knit, inviting personality are just two of the reasons the Pape Clément is going to be virtually impossible to resist, even in the early going. The blend is 60% Cabernet Sauvignon and 40% Merlot. Tasted two times.

As with the white, the 2015 Château Pape Clément is up at the top of the hierarchy and is a tour de force in Red Bordeaux that should be snatched up by readers. Coming from a 50-hectare parcel of the gravelly soils and harvest between September 25th and October 15th, it’s a blend of 56% Cabernet Sauvignon, 40% Merlot and 4% Cabernet Franc that saw a long maceration (30-40 days) and 18 months in 80% new French oak. With a deep ruby/plum color and awesome notes of currants, black cherries, truffles, chocolate and graphite, this beauty hits the palate with a massive, full-bodied, opulent, sexy, yet never heavy style. With terrific concentration, perfect balance, and ripe tannin, as well as plenty of oak, give bottles 4-5 years of cellaring and enjoy over the following 2-3 decades. Tasted three times.